“Admission to The Daily Record’s Circle of Excellence is a testament to the exceptional contributions each honoree has made through the course of years,” Suzanne Fischer-Huettner, Daily Record Publisher, said in a statement. “We are proud to recognize Traci Barnett for her continued outstanding work and dedicated service.”

“Induction into this esteemed Circle is particularly special this year—2012—as Girl Scouts, an organization dedicated to developing girls’ leadership potential—celebrates its 100th anniversary,” Barnett said of the achievement. “This award endorses the work of Girl Scouting and my efforts to make Girl Scouts available to every girl in central Maryland who is interested in the program.”

The Daily Record’s annual list of Maryland’s Top 100 Women was created to recognize outstanding achievement by women as demonstrated through professional accomplishments, community leadership and mentoring. Circle of Excellence inductees are recognized for sustained achievements in those areas. In order to qualify for The Daily Record’s Circle of Excellence, women must have been named to the Top 100 Women two previous times. 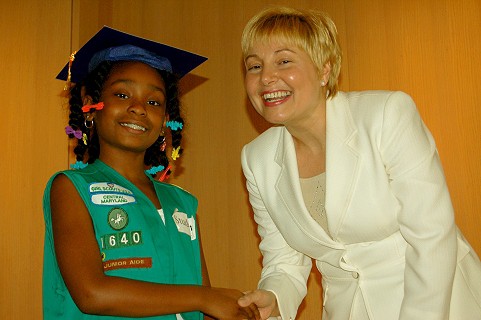 As with Top 100 Women, nominations are solicited from economic development agencies, women’s organizations, chambers of commerce and the business community at large. A panel of judges comprised of business professionals and past Top 100 Women winners from throughout Maryland review all of the applications submitted. Judges are asked to be extremely selective when it comes to selecting those women named to the Circle of Excellence. They look for continued involvement in all key areas — professional accomplishment, community leadership and mentoring — and demonstration that each nominee remains actively involved and proactive.

Jenette Young – A dynamic Baltimore Businesswoman on the Move