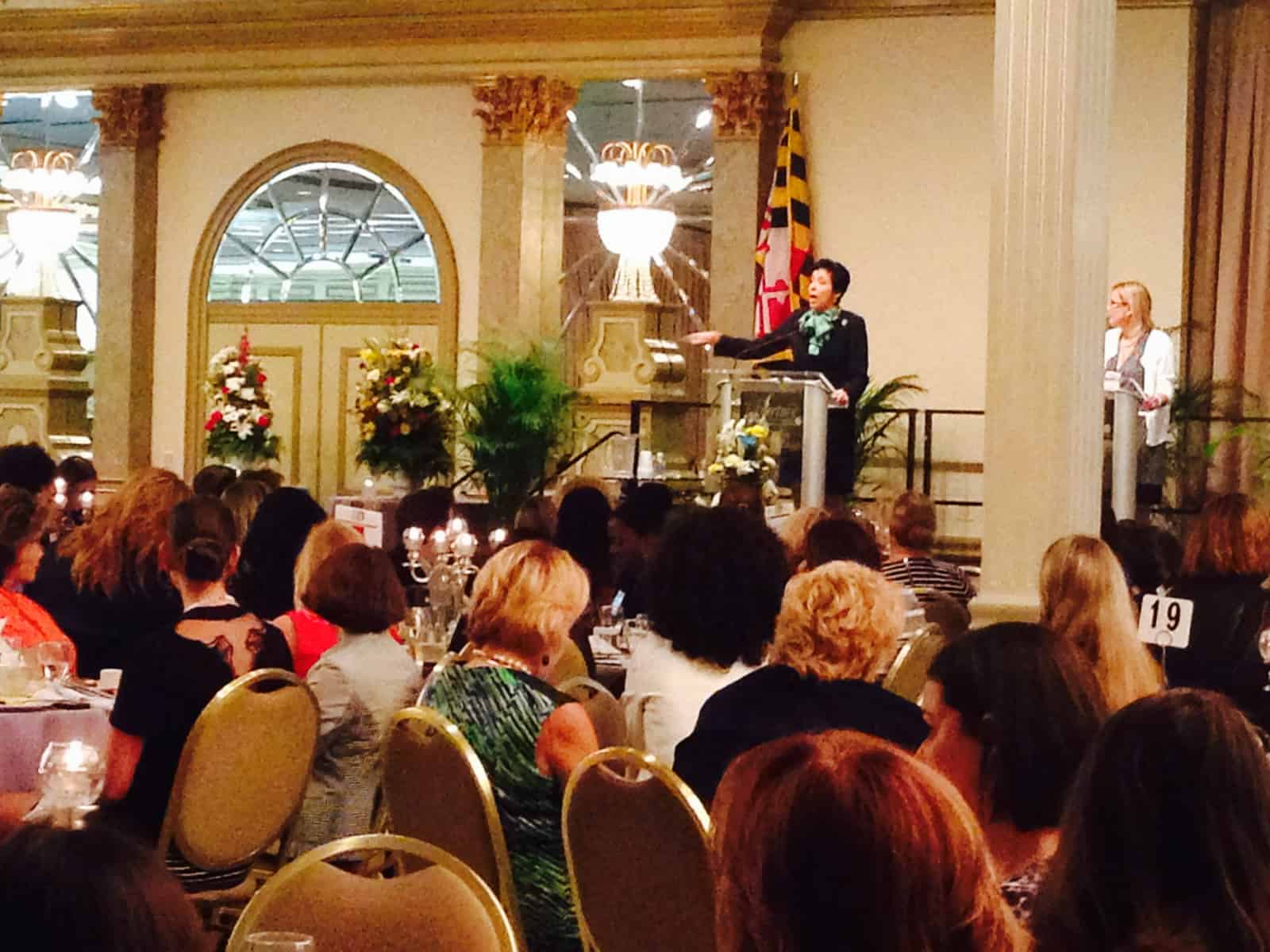 Introduced by Deborah Phelps, Director of the Education Foundation of Baltimore County Public Schools, Chavez stated that “a girl is worth the time.” She argued passionately about the importance of investing in girls. After a Q&A session was held, the Top 25 Fastest-Growing Woman-owned Businesses were honored, with MyCity4Her being #9 on the list.

One of the most important discussions in terms of grooming future generation of women leaders begins with how we as established business leaders (women or otherwise) endeavor to empower the next generation of female leaders. An effective leader knows and acknowledges one of the key success factors of great leadership involves active and methodical succession planning. Today’s decision makers should care about how to integrate the next line of women leaders because somehow, somewhere, they will be faced with it.

The topic of women in leadership often stagnates on the ever-present subjects of continued discrimination (whether perceived or real), the imperative need (or just great desire) for true mentorship and meaningful sponsorship, access to equal opportunities for women in business and how we still need to break the glass ceiling. All these are very important indeed, and if I had my way we wouldn’t be talking about them so much – not for women, for veterans or minorities. However, few discussions specifically related to women in leadership ever touch on one of the most important leadership lessons to learn: having the courage to leave when leading.

The courage to leave when leading is after all touchy one, especially for those of us who fought tooth and nail for our seat at the table. You know who we are, we’re the ones who favored the MBA over the PTA, and vowed to work twice as hard as any man to get ahead. Forgoing precious hours with family, or at times even the very idea of having a family, or a serious relationship for the right to be called “Boss, Partner, CEO”. We’ve sacrificed, we’ve toiled, we’ve forgone vacations, we have worked countless hours often when many of our friends and colleagues are enjoying life, we chosen to stay to finish the project, to travel to see the client, to get the job done because we were given the opportunity to and often were the first woman it was offered to, or gutsy enough to demand it. Most of us are in our late 40’s and 50’s, and are often described as tough, ornery and difficult. Comes with the territory, and all par for the course if you want to become a “woman leader…”

However, many women have fought so hard to get where they are that, when they get to the top of the proverbial mountain, there is often a normal inclination to want to stay there a while and enjoy the view, versus handing the baton off to a younger version of themselves.

Reluctance to pass the baton often signals the beginning of a leadership progression bottleneck, and staying there longer than you should doesn’t serve you or your organization, not to mention future generations of leaders. Yet so many of us choose to stay anyway. Why? Are we just afraid the student may surpass the teacher, or that people will find out we weren’t that good at what we were doing anyway?

Besides, everyone knows the best leaders aren’t just taught; they are made, usually by example yes, but mostly by doing. After all, how can you ever lead if you’re never given the opportunity? You can only learn so much watching from the sidelines, or practicing. Eventually you have to get yourself out on that stage, show them what you’re made of, and do your thing. If a younger woman leader is not given the chance to really show what she’s got in the heat of the action, how can we expect her to really learn to be a good leader? Have we forgotten how much we wanted our first chance to prove ourselves?

I won’t lie that letting the the baton go, hasn’t been easy. It’s been painful and hard, and I’m still not an expert at it – not by a long shot. However, I’m finding the best way to do, is to try with the easier things, and use it as a confidence building exercise for all involved. I’ve sought out advice and suggestions from mentors and leaders I admire, and I’ve accepted I won’t always do everything right and if someone screws something up, it is part of the process and focus on the lesson that comes of it.

In a way, I think the younger women have it harder than we did. Those of us that were the first woman in a room didn’t have a fair female counterpoint of comparison, and this has been both a blessing and a curse. Younger women are coming into careers at a time where everything moves at the speed of light and the precedence of women before them “doing it all” creates a pressure to be a bit of a Super Hero of sorts, that no man or woman in their right mind can easily, or sanely live up to. There was no example for many of us, those part of the first generation of women leaders, no prior Super Woman role model; we essentially have created her along the way. It’s a lot for a younger woman to live up to, and some days when I review my schedule and responsibilities, and I reflect on how early I start my work days (usually 5 a.m. and no, I’m not joking) and end them (often past 9:30 p.m. easy) I wonder why she’d want to be in my position anyway? I will never get back the lost hours with my baby, my toddler, my young son. Sure, the fruits of my labor allow me to enjoy him now, but the career also is why I only have one, so those times are forever lost. Big price to pay, but I paid it. Should a future woman leader have to do that now? There’s much debate about the question.

Hopefully the young woman (or qualified person) who comes after me will have the good sense to put more limits forth and manage her time more carefully. Hopefully she will not make the same mistakes I did, and allow more time for friends, for family, the important things. Hopefully she will not hold onto her position so tightly that she fails to empower future generations. One can only hope.

Most of all, I hope she will learn that it is not at the apex of her career that she should start looking for a successor.

As a business owner, I didn’t have to wait for someone else to give me the opportunity to show what I could do. I was very aware there would be little chance to do so conventional jobs, so I chose to create my reality from the ground up and doing so has been very satisfying. That said, I’ve learned to embrace the reality that change is a constant, and preparing for it is critically important for any organization’s success and long-term viability.

The successful passing of the baton is in my opinion the final and most important lesson of leadership, and that is why more of us should be doing it, and freely. As I begin to do it more and more where it makes sense and where I am ready; I have found the exercise to be both empowering and freeing, especially when the successor is a worthy candidate. The alignment of a qualified successor presenting themselves for an opportunity at the very moment I am starting to question how much I need to keep leading. Paying attention to that timing has helped me determine through a gut check when might be the time to move on and create space for someone else to grow into their own potential.

If we really want to empower the next generation of women leaders and effectively, we need to teach them to lead by letting them do so. Take a deep breath, step aside, gracefully and offer to be there if they need you to help but understand if they don’t, and don’t take it personal. Their talents, passion and abilities may surprise (and surpass) you, and that may just be a very good thing.