No matter our age we’re influenced by popular culture trends, by what our friends are wearing, listening to, driving; by what we see and hear in the media and entertainment worlds.

But what works for us in our personal lives may not translate positively to our working world.

This is a lesson that’s particularly important for younger generations on their career journeys.

Take dress and personal appearance in the workplace, for instance.

I recently spoke with a New York City college instructor who told me the story of a young college woman who was on a professional track. But after reading Snooki’s book, “A Shore Thing” she started acting, speaking and even dressing like the “Jersey Shore” celebrity.  He feared for her professional future.  Unless this young woman is planning on a career as a reality TV star, she might want to reconsider her role models for business success.

Recently, a communication executive told me of her experience interviewing a young woman for a job opening. The applicant had great credentials, internships, and good grades.  But her appearance was sloppy and inappropriate and she had an attitude to go with it.  When the girl called back to see if she had gotten the job, she was surprised she had not.  The executive explained to the young woman that the way she spoke, her general attitude and appearance lost her the job.  The girl thanked her for the feedback and said she had no idea she came across that way.

Young women and men appear to be getting mixed signals from the popular culture and the extremely casual hi-tech business culture spawned by the likes of the perennially hoodied Mark Zuckerberg.

It’s important to remember that despite what we see and hear in popular culture some rules of dress and appearance are paramount in the business world.

The conventional wisdom for interview dress is to look put together, like you took the time to think about where you were going and made the effort to look respectable.  That may change once you get the job or according to the business culture, but you can be pretty sure it doesn’t mean “coming in with greasy hair, reeking of cigarette smoke and wearing a low-cut top with mustard stains”, is OK as one recruiting firm director described a recent job applicant she met.

Once you’ve got the job, consider the company culture then dress to fit both the environment and how you want to be perceived.  As a mentor once told me, “dress like the job you want”.  Do you want to be seen as a future manager or marketing director, or do you want to be known forever as the snarky, well-pierced, tattoo- sporting recent college grad?

Another area where pop culture can trip up young people on their career paths and sabotage a confident, professional presence is vocal fads.  Two of the big fads are upspeak and vocal fry.  Upspeak is ending statements with a question mark, sounding like you’re uncertain, asking for approval or even apologizing.  Vocal fry, once considered a speech disorder, is that guttural swallowing of words at the end of a sentence.  Celebrities like Kim Kardashian and Paris Hilton are famous for contributing both vocal fads to popular culture.  It used to be just teenage girls were guilty of these.  Today, I hear both young women and men, professionals with impressive credentials lose credibility the minute they open their mouths and out comes upspeak, vocal fry or “mumble mouth”.

Instead, finish your statement with a strong downbeat.  Breathe.  Finish a sentence so we can hear your words.  And you know, like, how we like, you know, use filler words?  Take a pause instead and leave those high school ways behind.

Fashion and popular culture trends may help define us personally but we should take care that they don’t hurt us professionally. 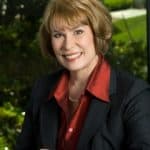 About the Author: Marilyn Ringo is a former News Anchor for CNN Headline News and an Emmy Award winning television producer and reporter.  She has been a Speechworks coach helping professionals communicate successfully for over 15 years.  She teaches Business Communications in the Georgia Tech MBA program. For more information, please visit www.speechworks.net or contact Marilyn at Marilyn@speechworks.net.