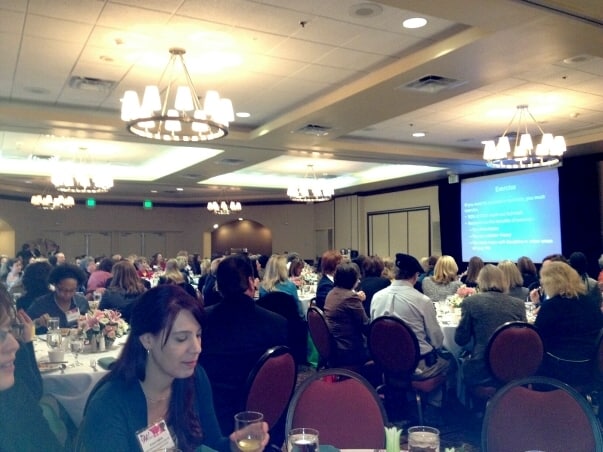 A full breakfast was served, however the timing of the featured key note on plastic surgery was questioned by a few in attendance. Nevertheless Dr. Shermak was engaging, and knowledgeable about a subject matter that is delicate, and has most women (even if they won’t admit it) very curious.

Veronica Cool’s presentation definitely got the crowd fired up, Ms. Cool who is also the Chairwoman of the Maryland Hispanic Chamber of Commerce has become a highly in demand speaker due to her candor, excellent advice and popularity with audiences. Her presentation was met with overwhelming applause and a standing ovation. The key points of her talk were:

“Make it a point to find someone that is successful but UNLIKE you completely – that is a SPONSOR, and different from a mentor – you need both.”

“Watch your girlfriends – not all are your sponsors, mentors, allies…”

“Be strategic – leverage knowledge and expertise and do your research!”

“Remember to show others off and the karma comes back , when you show other people off, open doors for others, celebrate one another good things happen do all the this and all the while  don’t be afraid of selling your skills and talking up your own value.”

“When it comes to networking be intent full, be strategic, and encouraged people to get on Linked In”

“Carve your niche – Create your opportunity!”

Lynne shared the following with the audience…

“Even just a little exercise can increase your oxygen capacity by 30%” – After telling the crowd that – Lynne got all attendees engaged in a chain of massage – really. Lynne is well known for her ability to “get people moving” whatever the context of her speaking engagement. This crowd of professional women was no exception – which made her a particularly well suited “Stretch Sponsor” as by that time, most of the attendees were ready to move.

Lynne shared Julie Steinbergs 9 rules to climb the corp ladder as listed in Forbes which were:

The event ended approximately by 11:30 and all in all was a pleasant and positive way to spend a weekday morning making some networking connections and learning some valuable insights about things of particular value to women. The BBJ extended a great subscription special in conjunction with the event…which was an added draw for attendance. The BBJ publishes its influential “Book of Lists” in December annually and is increasingly bundling event attendance with subscriptions to provide added value to its audience and subscribers. For more information about BBJ events or subscriptions click here.