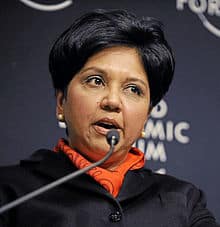 At the recent Aspen Ideas Festival, Indra Nooyi, Pepsi’s CEO, spoke about balancing her professional and personal life. She spoke out about the struggles she has felt trying to raise her daughters and succeed in her career.  Nooyi says that balancing the two has left her with guilt and that ‘having it all’ is a myth, and that trying to achieve it leads to only pain and suffering.
After hearing about Indra Nooyi’s interview, I couldn’t help but thing about Anne-Marie Slaughter’s popular article “Why Women Still Can’t Have it All”. In the article Slaughter talks about raising her son while getting offered the job of her dreams. She says that it took her months to admit to the fact that she couldn’t handle both aspects off her life. Even though she had a supporting husband to help with raising the family, she wanted to be home.  Slaughter goes on to point out that women won’t be able to have it all until employers recognize that mothers need more flexibility and balance in their professional lives. That unless employers make it possible for the women that work for them to “balance their work and family the way they want to, with flexibility and all sorts of different options, (employers) are going to lose a huge amount of talent.” Slaughter says that in not giving women these options, it will not be smart for employers, business, or society.
Slaughter says that selling the idea that women can ‘have it all’ to a younger generation of feminist has created a group of women that will choose family over pursuing a successful professional career, which isn’t always the best choice.

Yet, when the women in my college classes have discussed this topic the main issue isn’t trying to make a choice between family and a career, or even how to balance the two. The main question I find younger feminist asking is since when did ‘having it all’ only mean a family and a career?
Many women today are comfortable admitting to the fact that having a family is just not for them, but does that mean they don’t ‘have it all’ in their life? When women have to make a choice between family and their career, they will always lose. They will either be seen as a workaholic or leaving their feminist roots behind. Men don’t seem to have to stress over this choice quite as much in their life, yet still come out winning as the successful businessman or the loving father, who puts his children first. Employers should give all their workers, men and women, flexibility in order to raise their family the way they want to, instead of making women chose.

However, there are women who are giving new hope to the idea that having a career and a family is possible. Helena Morrissey, the CEO of Newton Investment Management, believes she has found a balance in ‘having it all’. With nine children, and a successful career, Morrissey says that the key to managing it all was her husband. He was able to help more with the family when she had to work. She says, “I don’t believe in work-life balance, I just believe in living a life where you’re kind of like at 360 degrees all the time,”
It can be discouraging for younger women to feel that they have to chose between only two options, career or a family, when there are many more ways to live a fulfilling life and still ‘have it all’. Times are changing and so is the old black and white idea of ‘having it all’.