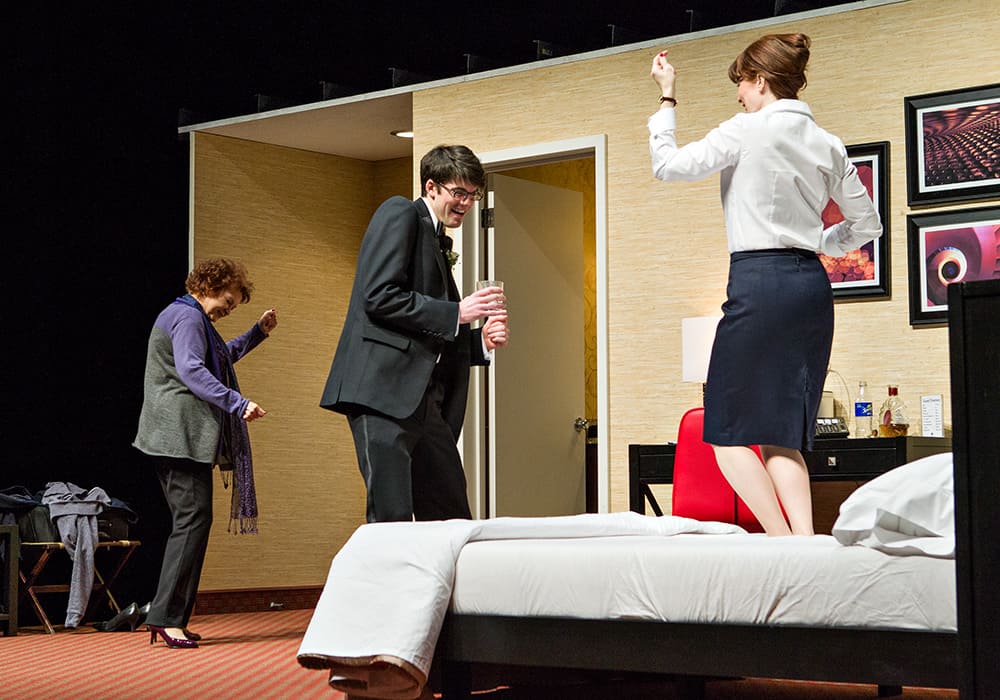 We attended opening night and would highly recommend seeing this production for a few reasons:

Lead Actress Susan Rome is a native of Baltimore, Maryland.

The young (only 30 years old!) playwright, Marisa Wegrzyn, is from Chicago—and her mother was a flight attendant – so she has first hand knowledge about the subject matter and thus injects the plot with cynical and poignant realism.

The director Susanna Gellert is also a full-time staffer at CENTERSTAGE, as their Artistic Producer, although this is her first time directing at Center Stage. Anecdotally, the lighting designer (Scott Zielinski)  is her husband bringing a whole new meaning to “theatre family” in relation to this particular production!

Approximate running time is one hour and thirty minutes, without an intermission. Mud Blue Sky contains strong language, sexually suggestive images and use of illegal substances. It is not appropriate for those under the age of 15.

As with all opening night festivities a gathering upstairs followed the production and featured munchies by Sascha’s and Mallow treats.

The State Theater of Maryland, CENTERSTAGE is currently celebrating its 50th Anniversary Season. The not-for-profit company serves as Maryland’s hub for smart, provocative, and entertaining theater and as a catalyst for conversation with the community.

Each year, a consistently broad range of productions in two intimate performing spaces attracts highly diverse audiences of more than 100,000 people—including more than 8,000 fiercely loyal members, many of whom have been with the theater during its entire history. Additionally, CENTERSTAGE offers a variety of dramaturgical, community, and educational programs to broaden access and enhance the theatergoing experience.

Center Stage has a wealth of varied subscription offers and ticket packages.

Spring Packs are a great deal at only $99 for any day, any seat and three (including Mud Blue Sky) productions!