The state of the art facility is managed by none other than Vicki Brick, the couples daughter and an active part of the company management team. Hundreds of people posted for the event and toured the new gorgeous state of the art facility which will be giving serious competition to nearby (and also woman-led) MAC Athletics. Lynne out of breath from doing an incredible demo (where she once again proved that age is just a number) shared the following thoughts.

“Victor and I have been overwhelmed with the response we have received since we opened the doors on January 7th.  We are excited to celebrate this ribbon cutting ceremony with all our members as well as the surrounding community.”

Her husband and CEO of Brick Bodies Fitness Services added

“It is only fitting that Clark Mackenzie is present for the ribbon cutting ceremony as he, along with Tom Whipple sold us and helped finance the original Brick Bodies Padonia 28 years ago.”says Victor Brick, Owner/Founder.

The New Brick Bodies Padonia is located in the former Shoppers grocery at 2430 Broad Avenue, Timonium, Maryland, across the street

from their former West Padonia Road location. Also don’t forget that Brick Bodies hosts summer camps with a focus on daily fitness and fun for children of all ages. To find out more click here.

The  58,000 sq ft club housed in an area that held a former grocery store  features the following impressive facilities:

Group Exercise Studio  which includes a projection TVs so the instructor can be seen easily from anywhere in the room and is now the largest in the area. A Mind/body studio and an incredible “Little Bricks” Center featuring:

Brick Bodies Fitness Services, Inc. is a chain of coed and women-only health clubs located in the Baltimore, Maryland area. Brick Bodies operates two women-only health clubs under the Lynne Brick’s brand and five coed clubs under the Brick Bodies brand.  The company also operates 16 Planet Fitness-Maryland, a budget health club chain. With 23 locations and 150,000 members between the three brands, the Brick’s own the largest health club chain in Maryland. Brick Bodies is listed as one of the top 75 health club chains in the United States and has been named in Baltimore Smart CEO’s Future 50 as one of the 50 fastest growing companies in the Baltimore four years in a row (2007-2010).  In April 2010, Brick Bodies was named the top gym in America byFitness Magazine under the category “Best Mom and Pop Shape – Up Spot”.  In January 2012, Brick Bodies Padonia was named one of the top gyms in Baltimore by Baltimore Magazine. Lynne Brick, BS. RN., is an international fitness personality, motivational speaker, and an IDEA, The Association of Fitness Professionals, Instructor of the Year. Victor Brick, M.Ed., is an international fitness consultant and is an IDEA Business Person of the Year award winner.

Below see more pictures from the event: 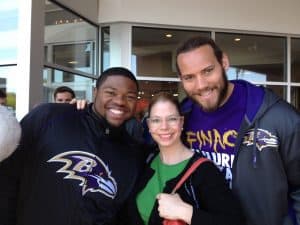