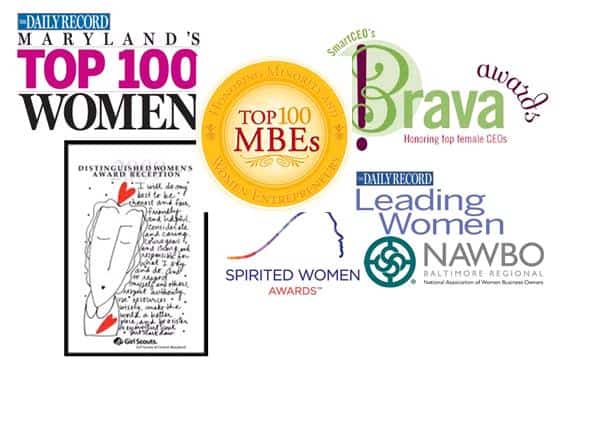 The “Oscars” of Women in Business Awards in Maryland

Watching the Oscars last night, one couldn’t help but think about how all award shows are important to building brand recognition whether for a person (as in the case of an actor, director or studio) or a business. In Maryland there’s several types of awards that can allow women in business to gain greater visibility and increased influence. However, not all awards are created equal and if you’re going to try to use awards to draw attention to yourself and your business – we say its best you go in with eyes wide open. Don’t get us wrong, we’re not saying there’s anything to fear but there are some things that come with the territory when you’re looking to capitalize on the visibility an award may or may not bring you and your business.

With that in mind here’s our list of the top “Oscars” of award programs of particular benefit and relevance to women in business.

Maryland Top 100 is produced by the Daily Record.

Every year in May – The Daily Record celebrates 100 women who exemplify the best that Maryland has to offer. These women are from all walks of life but an exceptionally high amount of them are business women, professionals, entrepreneurs and interestingly members of Network2000. Network 2000 is an exclusive, leadership association of sorts that is somewhat hard to get into, but if you make it – can help you and your business definitely move forward at a faster pace it’s been said. Though Network 2000 is not directly related to the Daily Record, the awards and the membership organization seem to share a symbiotic relationship of sorts, with many of the members making it into the elusive and highly sought after “Circle of Excellence”.

Top 100 nominations usually wrap up towards year’s end (you’ve missed 2013’s BTW but keep an eye out for 2014 as buzz starts in the fall) and the winners are announced sometime in the early spring…We’ll keep you posted.

Maryland Top 100 does accept self nominations although we feel it is probably better to get yourself nominated by a respected colleague and/or friend. Having someone who has one a coveted Top 100 award helps (though is no guarantee). To learn more visit here. There is no cost associated with nomination or winning though it is produced by a media company and the event does serve to drive sponsorship and advertising revenues in programs, special inserts etc . Consult the award’s “About Page” to learn more about this particular and highly desirable awards program.

Even if you don’t want to be nominated, attending the sold out event is usually a “must do” on most well connected business women’s lists – SAVE the date – this year’s is May 6, 2013.

Smart CEO’s Brava Awards are held in July every year and have honored hundreds of amazing women in business from Maryland. The brain child of Smart CEO Publishing, the event is fast paced and the winners are consistently some of the state’s top women business owners, leaders and entrepreneurs.  According to their web site here’s how SmartCEO describes the award…

SmartCEO’s Brava! Awards program celebrates top female CEOs who combine their irrepressible entrepreneurial spirit with a passion for giving back to the community. Brava award winners are exemplary leaders of their companies and in the community who encourage local philanthropy, mentor fellow CEOs and their companies on the path to tremendous growth. Each year, an independent panel of business leaders selects 25 Brava winners based on applications submitted. SmartCEO shares their inspiring stories in SmartCEO magazine and celebrates their success at an awards celebration.

SmartCEO Brava accepts self nominations and the system used to score the nominees is pretty intricate.  Criteria is somewhat strict though so we encourage you to find out the details.  Find our more about the nomination process here. NOMINATIONS are open at the moment – and close on March 8, 2013 so hurry if you’re interested.
Other award programs that you might want to pay attention to and consider as a means to bring increased visibility and buzz to you and your business include:

Spirited Women of Baltimore Awards (in full disclosure – OUR own event program!)

At the end of the day who doesn’t appreciate some recognition? We feel that’s why award opportunities can really be a benefit to you and your business if you approach them with perspective and the understanding that not all awards and/or programs are the best fit for everyone.

In March we’ll be featuring an article on how to specifically use award nominations and wins to boost visibility for you and your business. Stay tuned!

Meanwhile, if you have some other award programs we haven’t mentioned that you’d like us to include – please send us your thoughts in the comments section. Meanwhile much continued success.