Funding Know How with Shelby Taylor of Chickapea, a Canadian company that recently recieved $9.3Million dollars in funding, is for female founders and women in business who are interested in raising capital.

On April 8, 2021 District Ventures Capital (“District Ventures” or “District”) announced  a $9.3M investment co-led with InvestEco Capital (“InvestEco”) and Export Development Canada (“EDC”) in popular organic pasta brand Chickapea. The funds from the Series C round will be used to support Chickapea as it continues to grow in both Canada and the United States and expand its product line to include more nutrient dense pasta.

Chickapea entered District’s ecosystem in 2017 through the District Ventures Accelerator program and later received a seed capital investment from the marketing focused venture capital firm. In 2019, Chickapea both strengthened and broadened its investor base with an investment led by InvestEco, a Toronto-based venture capital firm that has been investing in the Canadian market for over 20 years. EDC participated in the 2019 round setting the stage for this significant Canadian funding round which had participation from all three institutions and from some of the original angel investors who helped fuel the company when it first got started in 2016.

MyCity4HER.com’s Founder Monyka Berrocosa recently talked with Shelby and asked her to share her best advice for women and female founders seeking to raise capital. This is what she shared…

Now that you’ve been through an A,B and C round and gotten funding, what is the top advice you would give to women founders who are seeking capital? 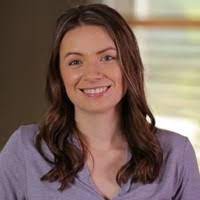 Because I know a lot of women shy away from it. It’s not an easy or simple process to go through.

#1 I would say just don’t make yourself small.

When I first had to raise capital, it was just a matter of need. I had, like I said, zero experience. I I had no idea what I was doing.

#2 Trust the advice of smart people.

I just really counted on the advice of some trusted advisors and really did my best.

People believed in me, back when I first raised capital, I barely even had a product, it was really just an idea. I think a lot of women sort of think they need to have it all together, perfect, before they go forward.

I would just say, just just start, just do it. Start reaching out to people, and you’ll realize that there’s a lot of interest, even though it’s not perfect yet.

To read the whole interview and view the video of it click  here.

Founded and led by Shelby Taylor, Chickapea is a certified B Corporation  based in Ontario, Canada 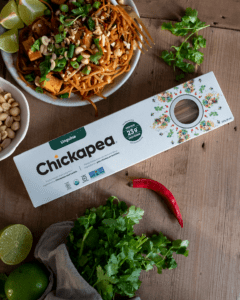 whose mission is to create good for the world through nutritious, organic meal options and impactful social contributions. The company, which was named in the top 100 fastest growing companies in Canada in 2020 by the Globe & Mail, offers a line of organic pasta made with only chickpeas and lentils.

Chickapea pasta is sold in more than 4,500 retail locations across North America and is available in 11 different formats including penne, spaghetti, lasagne, spirals and elbows. Recently, the company launched their +Greens line – a veggie-packed, organic and gluten-free pasta made with only chickpeas, lentils, kale, and spinach. Chickapea was founded and is led by Shelby Taylor. You can find out more about the company and use their locator to see where it is sold near you by clicking here. Chickapea is also sold on Amazon.